Celebrating independence with cured meats is a modern tradition common to both Hungary and the U.S. Fortunately for choosy carnivores, Hungary celebrates several independence holidays each year.

Hungary’s 1000 year history has been crisscrossed with occupations, fights for independence and bloody defeats. March 15 marked the beginning of Hungary’s 1848 revolution against the Austrian Empire. Just what were the Austrians doing in Hungary? Well, that gets a little complicated. I (Jenn) can’t do much to help you with the shift in political boundaries, but how about a time line to clear things up?

and other activists demand and are

granted reforms in a bloodless revolution

which quickly developed into a full-fledged

1867 Austria and Hungary negotiate to form the Austro-Hungarian Empire, which persisted until the end of WWI.

March 15 with speeches at key

monuments, by wearing the tricolors, eating salami and other festival foodsand a free day at the museums! We couldn’t pass that up so we set out on a museum marathon which consisted of exactly two museums. It looks like we chose the best ones because for one day only it was permissible to climb all over the artifacts at the Museum of Military History.

Hungarians celebrate March 15 with enthusiastic patriotism not because it began a revolution that was ultimately unsuccessful, but because it represents the indomitable spirit of the Magyar (Hungarian people) in their quest for national freedom. We are honored to celebrate that spirit with them.

What about you? What are your favorite ways to commemorate independence? Join the conversation on our facebook page. Click here to link directly.

Next week is Spiritual Impact Week at I.C.S.B. During this week students will attend chapel every day to hear engaging speakers in addition to other activities during the week. Please pray that God will speak to students' hearts, many will receive His salvation and that real life change will result. Thank you for praying for the health of our school! Attendance is up, but many people are still battling bronchitis and stomach issues. Please continue to pray for health. 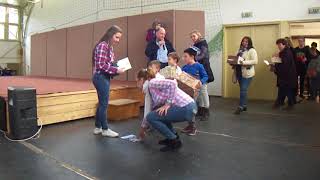